Oak Processionary Moth (OPM) (Thaumetopoea processionea) is non-native to the UK and has become established in London and some surrounding counties since its arrival in 2005.

The Caterpillars of Oak Processionary Moths feed on the leaves of Oak trees and can strip an Oak tree bare, leaving it weak and exposed to other threats. They also pose a health threat to humans and animals.

The dark caterpillars are found in, or very close to Oak trees and as their name suggests, move in nose to tail procession, their white hairs pose the main risk as they contain a protein which can cause irritation to the eyes and skin, sore throats and breathing difficulties to people and animals who come in contact with them. The risk of exposure to these hairs is highest in May and June.

Do not ever touch the caterpillars or their nests.

The caterpillars build white webbing nests on the bark of Oak trees (they often discolour to brown which makes them hard to spot), they spend most of the days in the nests leaving to feed on the leaves at dusk and dawn. During winter the nests are empty but can still contain hairs, so must be avoided and reported.

Late July to September – Adult moths emerge, living for an average of three days during which they mate, lay eggs in healthy Oak trees, usually high in the canopy. The plaques are about 2-3cm long on high twigs and branches and will remain on the Oak trees during autumn and winter months.

Mid April to mid July – the caterpillars start to emerge (generally mid to late April but sometimes as early as March). As the caterpillars grow, they start to descend lower in the trees to build nests and feed. It is at this time that they develop the white irritating hairs which cause a health risk for humans and animals.

Mid June to Early September – during this time the caterpillars return to the nests to pupate into adult moths which takes up to four weeks. 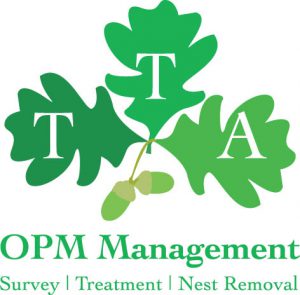